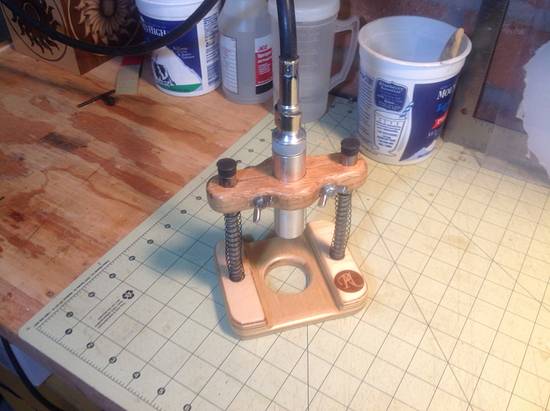 In order to start inside cuts in packet cut marquetry it is essential to be able to drill the smallest hole possible and to drill it exactly square to the packet face. This can be quite easily done with a good drill press and that is what I have been using up to now. At home in Canada I have a large Delta floor model and here in Az I have my ShopSmith which is an excellent drill press.

However, I want a small one to keep in the marquetry shop and that doesn’t require dragging the ShopSmith out of its cabinet and setting it up in DP mode just to drill a couple of holes so small you can’t see them. A couple of days ago I was on the verge of buying a small HF benchtop drill press but decided instead to try making my own special purpose marquetry hole installer.

I had a look at what I already had and made this up for free in less time than it would have taken me to go into Tucson to buy something. ……… and this little guy is perfect. Smooth as glass and with a fine little chuck that will grip the fragile #74 bit. It is based on a carving tool from HF and comes with a variable speed foot control.

I stole the springs and rubber end caps from the less than adequate contraption that I had been trying last year (shown below). They fit perfectly and complete the new tool nicely. 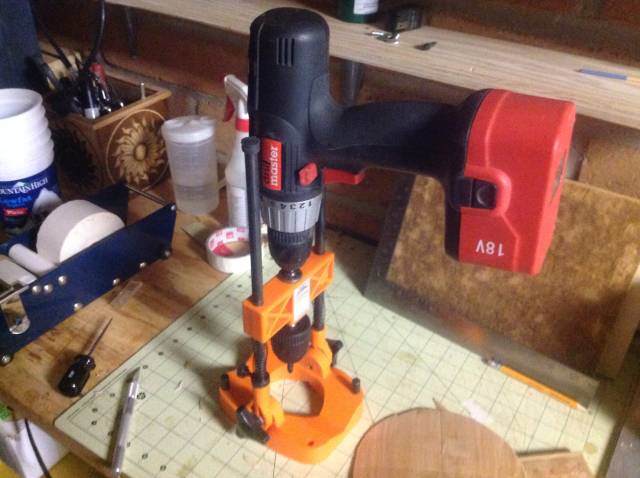 It is dead accurate,takes up way less space than a drill press would have, and can install holes deep into large packets unrestricted by the drill centreline to column distance that limits small drill presses.

The last photo shows the 1" cypher discs I made with it. You chevalet guys will know that without really accurate, square holes, you just don’t get all four of these with no sign of where the holes were.

I admire your creativity Paul.

It beat the drill press as the bit is closer to entry point.
Nothing I bought from harbor freight was any good mot likely their drill press would have been wobbling all over. I must say that I never owned the HF one.

I like the dual use of the carver piece.