There have been several discussions here lately about hide glue so I thought I might post a little primer I made up a while back to answer some questions and maybe prompt the discussion.

There are lots of myths around hide glue like it isn’t very strong, won’t last as long as modern glues, smells really bad, won’t keep long once hydrated, is really messy and hard to work with and that getting it wet will ruin it.

There are more but I’ll start with these and you can question me about any others you may be worrying about.

1) Not very strong.
In fact even the weaker hot animal glues are stronger than most modern glues and ultimately who cares because they are all stronger than the wood they are gluing.

Here’s an example. These joints were made with no clamps, just hide glue smeared in the holes and on the fingers and then assembled. 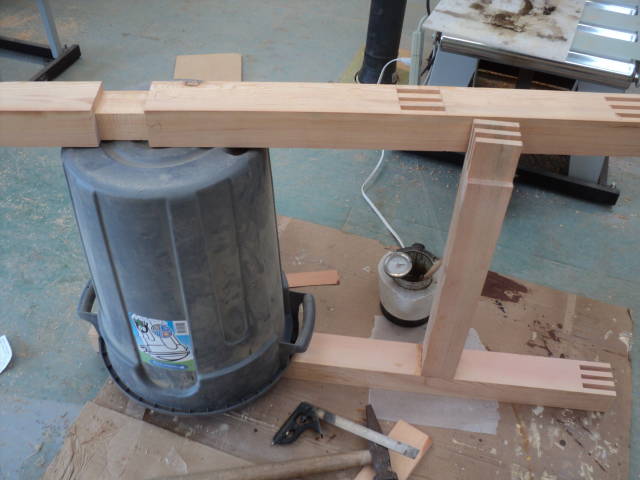 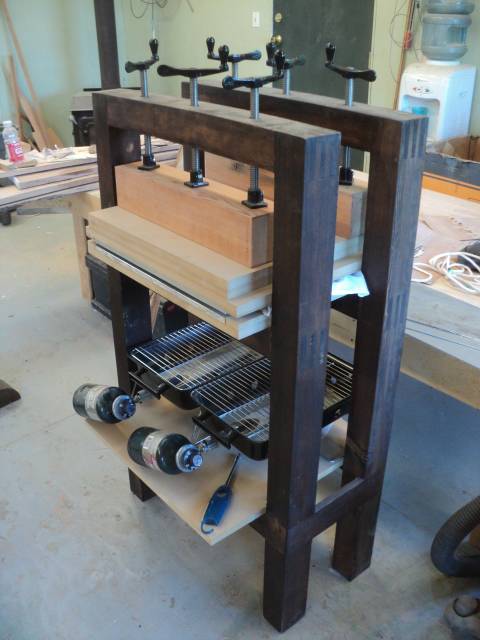 You can imagine that those six screws can exert a lot of force. The only thing holding this press together is the glue. No pins, no bolts, just glue………..and I do crank on those screws.

If left in the gel state in a warm place it will attract mold and essentially rot producing the smell associated with any rotting animal product and yes that’s REALLY bad. … But it ceased to be glue when the first mold appeared. The mistake was not caring for the glue properly.

I use it every day so my routine is that it goes up to the shop with me first thing in the morning and gets plugged in and every night when I leave the shop I take it down to the house and put it in the fridge. I’ve never had it go bad and I never throw it out, just add to it as needed when it starts to get low. Constant cooking like this actually makes it stronger.

I leave my glue pot in the shop ………….. next to the radio.
When I leave the shop at the end of the day I turn off the radio and that reminds me to take the glue pot….. simple.

It spends its evenings between the cat food and the Gatoraide. 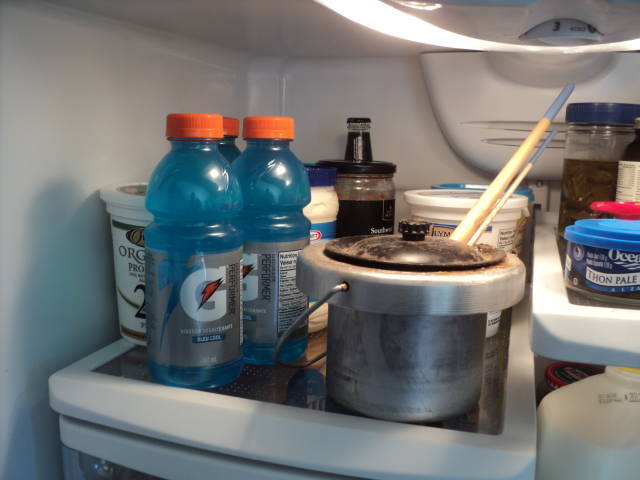 4) Getting wet will ruin it

To soften (reverse) hide glue you need the presence of both moisture and heat (so don’t take baths with your furniture.) Immersion for a period of time wouldn’t be good either but casually getting it wet is not a problem. On the other hand when you need to repair a piece made with hide glue you can dis-assemble the joint with a very hot wet rag. Once apart you can immediately re-glue without removing all the old glue.

5) Messy and hard to work with

Here are a few short videos that should give you an idea of how messy and hard to work with it is.

……. and here’s a video by someone who knows far more about Hide Glue than I do:

That’s it for now.

YES, In fact I am on a little crusade for hide glue. All I ask is that you give it a try before you dismiss it.

Ask questions, make comments and criticize if you wish.

This should convince a lot of folks Paul. Seeing is believing. Contrary to yourself the PVA glued finger joint on my veneer press loosened a little the last time I used it. Good thing I pinned it because I’m pretty sure it would have totally failed otherwise. Next time I’ll use HHG!

Thanks Paul!
That answer a lot of concerns.

I am planning to use it for the first time on a box (a la Britboxmaker) with a lot of small pieces that I cannot really clamp because they will move all over the place and bulge from the pressure.

So I am hoping to just hold it with my fingers. Once it holds a little move to the next piece.
I will probably try blue tape to see if it can replace my fingers to go faster.
I really want to avoid CA glue it gives me a headache literarily.

Do you think its doable?