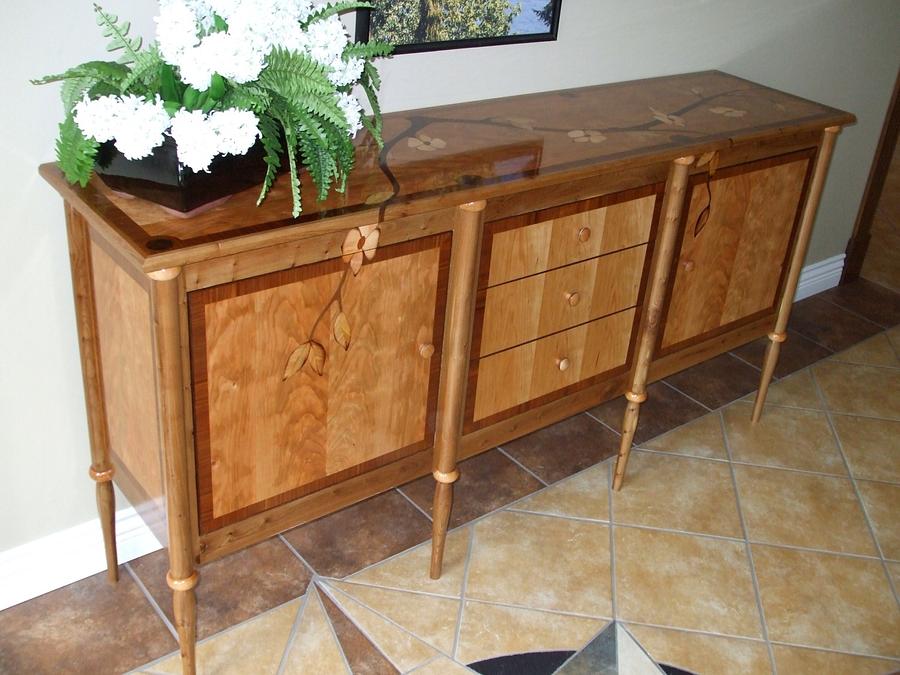 This may be the nicest piece of furniture I have made although the marquetry reflects my earliest attempt. It is certainly my wife’s favourite. I built it about 2008 or 2009.

It was built for the spot it now occupies in our living room. It features all shop cut veneers in Cherry, Bocote, Apple, Arbutus, Lacewood, Red cedar, and Western Maple. Legs and face framing are local Elm heartwood. The dogwood is the Provincial Flower of British Columbia.

All the “marquetry” on this was done using a router and an inlay bushing set. I developed a method of cutting all the pieces from veneer rather than inlaying into a solid ground. Basically I cut the pieces on top of insulation foam board and allowed the router bit to go right through. Interestingly, if I were to re-make this today, I’d likely do it the same way because you can’t cut that huge background veneer on either a chevalet or a scroll saw.

Nice, very nice. Beautiful design Paul I also like the mariners compass on the floor.

O man, what can you make beautiful stuff.

I have seen a glimpse or two of this sideboard in one of your posts Paul, but never the whole thing. It is a gorgeous piece of furniture and I don’t mean just the marquetry, although that is also excellent. Good design and the excellent work make this a keeper no matter it’s age.

Just gorgeous, Paul. Your retirement has been one of the most productive I’ve ever seen!

Beautiful! I love the way the vine flows thought the piece. It’s a great greeting coming in an entrance!

Thanks everyone.
Barb, I have a work ethic. Before I retired I built things and did business. Now I don’t have to do the business stuff any more. Other that that, not much has changed. :-)

I can see why this would be your wife’s favourite. A gorgeous piece!

Lovely piece. I can see why your wife loves it.
Roger

Marquetry inlay that flows through the different faces of a piece without interruption is fascinating.