I haven’t been doing much turning for awhile so I thought it might be nice to make some candy dishes for my son’s families and ourselves. This is the first of three small bowls.

My inspiration for this turning is the hand carved beer cups that are a tradition here in Norway and also the shape of Viking ships. These cups are smaller and more often than not are in the form of a chicken with the head on one end and the tail on the other as handles, but also abstracted horse heads similar to mine are often used along with dragons heads. Regardless of what type of heads, they all bear the name ‘ølhøner’ which translates to ‘beer chickens’ since most were carved with the chicken variation.Originally the carved cups were used at parties and they floated on a short barrel of beer so folks could just take one and dip it to get his drink. I’m not sure how far back this type of cup goes in it’s present form, but probably dates back to the time of the vikings in some form or other.

I would have liked to have carved this, and I have the right kind of carving chisels for it, but my arthritic hands can’t take it, so I had to devise another way. The solution was to turn a round bowl with a 1-1/2" waste strip paper glued into the middle and then after turning replace it with a thinner strip much like the keel on a boat which would also have the heads attached at either end, or at least one layers of the three layer heads. I did this for two reasons; I wanted a boat shaped vessel that vaguely resembled the lines of a viking ship and the heads had to have great strength as they are actually handles used to pass the dish around with. The sides were then carved down and shaped with a knife. four additional duplicate horse heads were cut out on thin stock with my scroll saw and glued onto the outsides of the heads already glued into the dish to make them thicker. After that I carved down the edges of the heads some and put some tool marks on them to give a little texture. On the beer cups these are often chip carved and more elaborate, but I thought it best to keep it simple for this first one. The wood use for this was Linden, which is related to bass wood. The tools used were a bandsaw, hand plane, wood turning lathe, drum sander, chip carving knife and scroll saw.

The last step was to apply a finish that would make it look old and wear worn. This was done using sun flower seed oil mixed with crushed coals from our wood oven. As you can see it was very black to start with and I can tell you that it took a lot of sanding and steel wool rubbing to get to where I wanted it!

I have to say, this was the most enjoyable project that I’ve done in a long time and I hope you like it. Besides the other two that I’m making for my sons, I will probably make more of these with chickens, dragons, etc. and in different sizes. I am also thinking about doing a blog on the build process if anyone is interested. 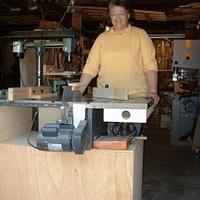 Where there’s a Will, there’s a Way! You’ve solved your problems fantastically on this piece. It looks wonderful, and very authentic. Nicely done!

You did great Mike.

When I saw the first picture, my first thought was it is something you did years ago.
I guess you did an excellent job at “aging” it.

A mast and a nice square sail would really set this off nicely Mike.
…… but I like it a lot just like it is too.

Not that old Mike. Just much wiser… 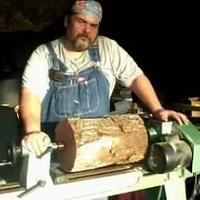 Thank you Madts and munchy.

I really like these historic type pieces you make Mike,great work.

Thanks Jim. I always like to think of old time craftsmen making this kind of stuff while I’m working on projects like this.