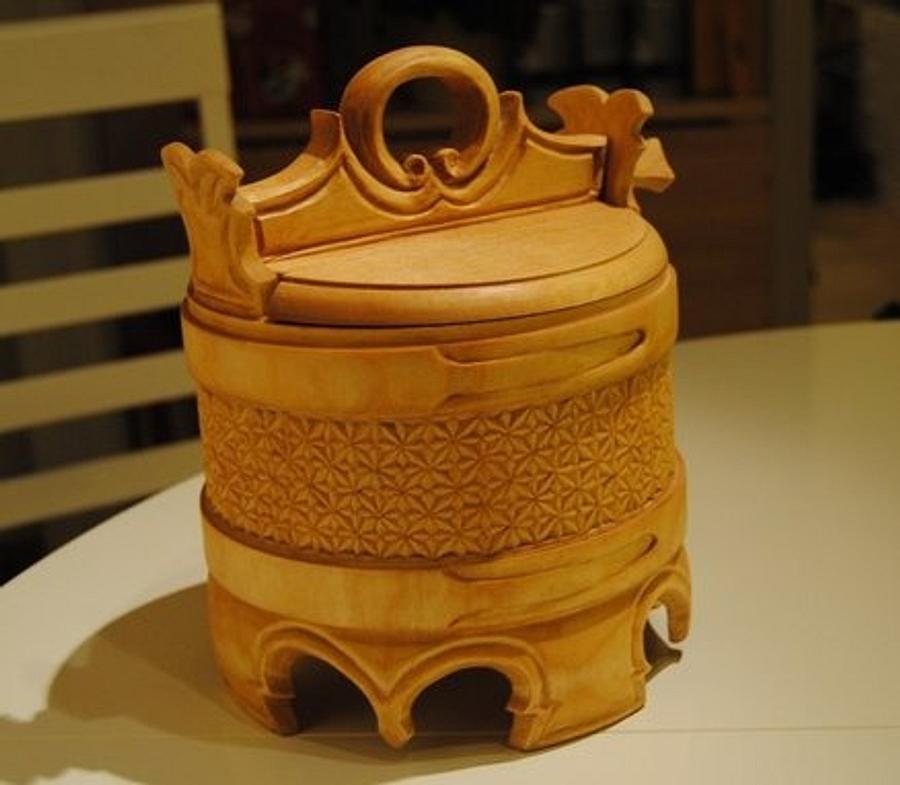 This is an old project I did several years ago. It remains one of my favorite projects. This one is the 2nd of two that I turned. I preferred the first one, but I tried to rose paint it and it looked pretty bad so I have sanded most of the paint off, but it’s still not quite done. I will post it when it’s finished.

It was a Norwegian tradition in some parts of the country to carry porridge in a container (called an ‘Amber’ in Norwegian) like this to a mother as her first meal after giving birth. That is the reason for it being decorative. I composed the decorative elements myself, but they are more or less true to tradition. I’ve never seen two of these alike. Decoration in the past varied between carving, rose-painting and wood burning and often a combination of the foregoing. The decorations usually included crosses and other symbols to ward off evil. These containers in a plainer form were used on a daily basis and the basic design is at least 1000 years old and perhaps a lot more. Actual examples of stave buckets that old have been found in our local area. The staves were even numbered inside, but just with straight marks l, ll, lll, etc.

The originals were made from coopered stave’s and banded with a thin band riven from a solid piece of wood to hold the stave’s together. The bands would have been pre-soaked in water and then installed tight as possible. While drying, the bands would shrink thereby keeping the stave’s nice and tight and by using it to transport liquids, the wood stayed moist and the staves stayed swelled and water tight.

My version looks pretty authentic, but instead of stave’s it is turned from solid green Birch (wet wood). The bands also look very authentic, but they too are just turned. The last photo shows the locking mechanism, just a handle with a dowel to insert through the ear and into the crosspiece on the lid.

After cutting out at the base and the top ‘ears’ I carved the decorative details. The center is chip carved with a simple repeating pattern, mainly to give some texture to the piece without being flamboyant.

The piece won’t be handled a lot, so I just used a light finishing oil and topped it off with some beeswax to give it a modest luster.

Thanks for looking in. I hope you like it.

You’re quite the traditionalist between this and the beer chicken. Very nice work. That must have made someone very happy.

Yes Mike, I like him. Also new and old together. To me it looks like a lot of work.

Thanks guys. The carving was pretty labor intensive, the rest went very fast. I used to be able to get some real nice birch logs for this kind of work, but not anymore.

Mike
That is a fabulous recreation of an antique vessel.
I often wonder how they did such fine work way back in time with the tools they had available .
Every time I see one of your turned projects it makes me want a lathe and one of these day it will happen but I am scared I will get the bug and the tools will cost more than the lathe .
Birch around here is still plentiful but you live too far to send you some .
I love that AMBER just something to cherish for a long time .

Sweet traditional item. Did they have lathes way back? How old is that tradition?

well it really looks good to me mike, real good, to me this is something i would see in a museum for things from around the world, it bespeaks culture and craftsmanship…thank you for sharing it with us…

Thanks Klaus, Thorreain and Bob. These vessels were not turned. They were made from staves similar to this one but with a lid. The staves were not glued, they were held together with bands like the fake ones on my amber or using willow or birch bindings like on this one in the photo below. This stave bucket is water tight. I tested it when it was finished, but it dries out a bit in winter and then swells again in summer. Kind of simple calendar! 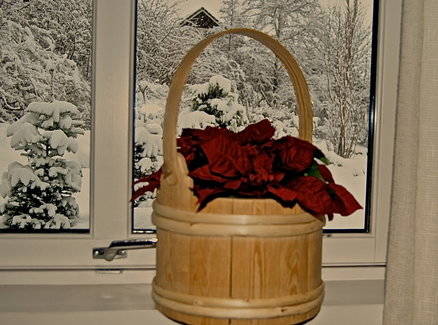 Beautiful work , and nice to hear about the traditions and
origins of these kinds of vessels .

Mike, this is great work!

This is exceptionally well done . . . what details!