This entry is a little on the philosophical side. It is about expectation and reality (one of which is quite easy to achieve).

I guess that each of us is entitled to become good at something in our lives if we work hard and I can’t complain as I think I was able to become a pretty good boat builder. The trouble is I want more. I want to be a pretty good marqueteur now …. but I want to be able to start at 60+ and still achieve it. We’re just never satisfied are we.

I took photos of some of my cuts as I was working on my jewellery box today and as a practice in humility and as a reality caution to others with similar aspirations, I will share them with you along with a few excuses / reasons for the results.

These are what qualifies in my world as good cuts (in a packet of three layers of 1/16" Araracanga). I was as careful as I feel I can be and had good light. The curves are smooth and the cuts are close to the line (1/100") and they would be just fine in Boulle or painting in wood styles but I’m doing piece by piece here. My best is borderline acceptable. My respect for Patrice is growing by the minute.

In the first one, my blade is getting dull and it is well out of the “good” range. My standard of “good” is based on how much red line shows inside of the cut. That signifies that the piece is too big and may not fit. Red line outside, while no better from a cutting quality standpoint, is preferable because the piece will fit and the error can be hidden relatively easily with mastic. The wavy line at the bottom is evidence of the dull blade. Araracanga is very hard and eats blades. 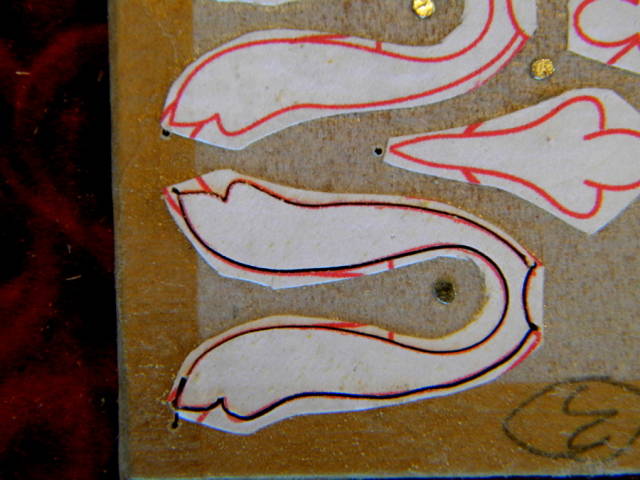 The second is with a fresh blade and is much better. I have to accept that this as about as good as it gets for me. 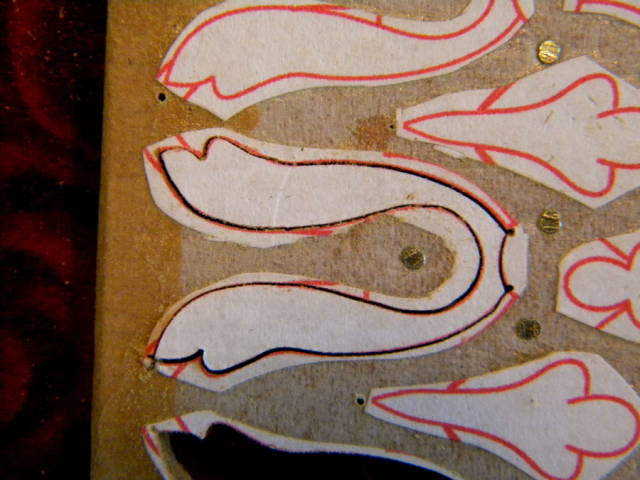 The third is in between, about my average ability. When I was cutting this, I thought it was near perfect. Even looking at it without enlargement it looks very good to me. (here comes one of those excuses) I think it may be more of an eyesight issue than a dexterity issue. 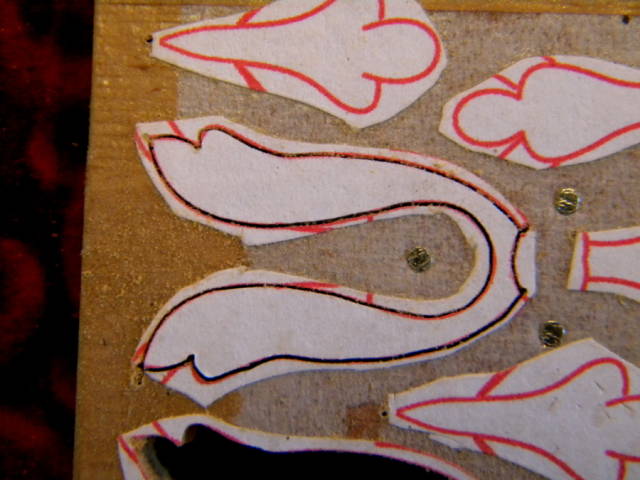 When I have cut piece by piece in the past, I have had better results and had actually started to think I was getting to be a quite acceptable cutter but when I stepped into the ring with these thick, very hard veneers all the rules seemed to change. Here are some of my early observations about this material.

1) Cutting: It seems that these veneers, besides being thicker are a quantum step harder than even the hardest sliced veneers I have used in the past. I wonder if this has to do with the extreme soaking / boiling etc. administered to the logs before slicing. It seems to be much harder to follow a fine line on the sawn veneer packets.

2) Fitting: In thinner sliced material, when you need to “squeeze” a slightly oversize piece in, The piece and its background both seem to give a little and you can sort of mash it in. Not so much with a 1/16" Ebony ground and a 1/16" Araracanga piece. If it is too big, you file it down or re-cut it.

3) Blade damage Thick sawn veneer seems to be harder on blades, not only in terms of dulling faster, but also in twisting the blade. This may again pertain to their hardness.

Here’s an example from yesterday. I had just changed to a new blade. I started at the hole on the left, cut the arc at the top, and went back and did the vein in the petal. Then I went back to the right end of the arc and started to do a rotation away from the piece to get a sharp corner. As I started the rotation, I lost my grip on the piece and it swung freely (gravity) about 180 degrees. This was in the middle of the blade, not at an end. As you can see, the blade was toast. It was absolutely impossible to follow any kind of line at all with it. Again, I have done this more times than I want to admit in the sliced veneer packets and, while the blade was compromised, I have never seen this dramatic of a change before. 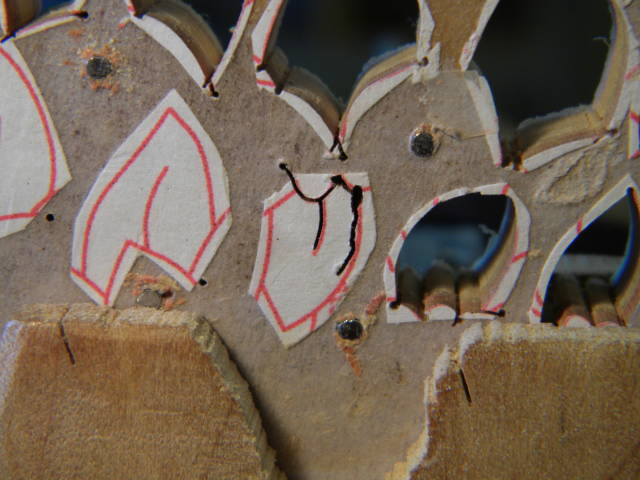 I won’t go on with this little rant except to say that as a hobbyist who came to marquetry after retirement I have to temper my expectations with a good dose of reality and cut myself a little slack if I want to enjoy my hobby. It is a good life lesson for me and I don’t mind sharing it. When all assembled, filled, and polished, this piece will look very good to the average onlooker and I have to be happy with that. Another marqueteur, or anyone with a magnifying glass, won’t be so easily fooled.

As we get older, the eyes do tend to keep us from doing our best. (I cringe every time we have young guests because I’m afraid there are probably cobwebs staring at them that I can’t see.) We think your work is extremely good, especially for your advanced years ;-). All kidding aside, most people would not be able to achieve in a lifetime what you have done in four years of marquetry. I would love to attempt marquetry but am quite content to do so vicariously through enjoying the blogs shared by you and others like Patrice.

Thanks for sharing the good and the not-so-good. We all learn that way.

I have felt aging interfering with everything I do.
For 60 + your are doing way better than many 20+. I think you are pushing yourself too hard.
Maybe slow down a little and enjoy what you are doing.

I think the whole problem is the French; they tempered with the veneer -:)