I have had my HFDC for several years now, originally stock, then with the Wynn 35A canister, and finally with a couple of home made cyclone type mods. My last mod finally got it built in and piped. Well, we sold that place and bought a smaller one that promises a permanent shop that doesn’t turn back into a garage every night so the DC had to be moved and I can’t do that without tinkering a little more with the system so here is the new setup that I have been using for a couple of days now.

This picture shows the trash can that collects the big stuff. If you look closely you will see it also gets a lot of the fine dust, most in fact. It is attached to my piping with a friction fit between the PVC and the inlet elbow. It is sealed on top with a piece of pipe insulation. 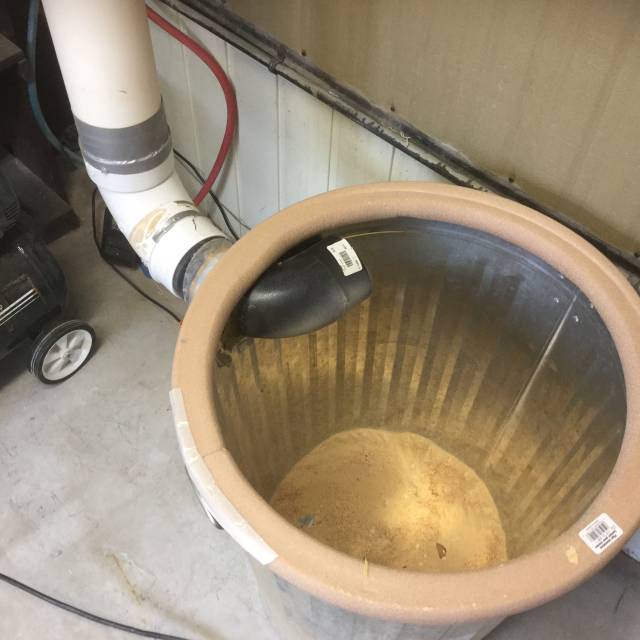 It sits a couple of feet from a support frame screwed to the wall. 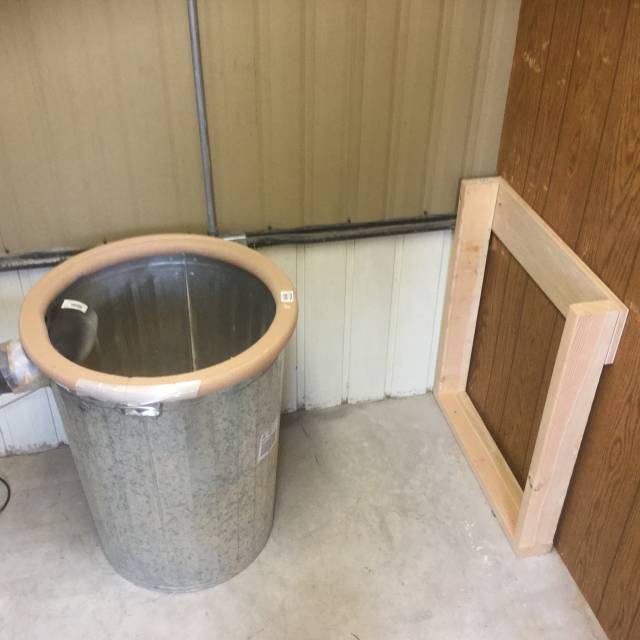 The can is covered with a disc of MDF a with a hole cut to fit a five gallon pail with the bottom removed. The pail is also sealed with pipe insulation…. 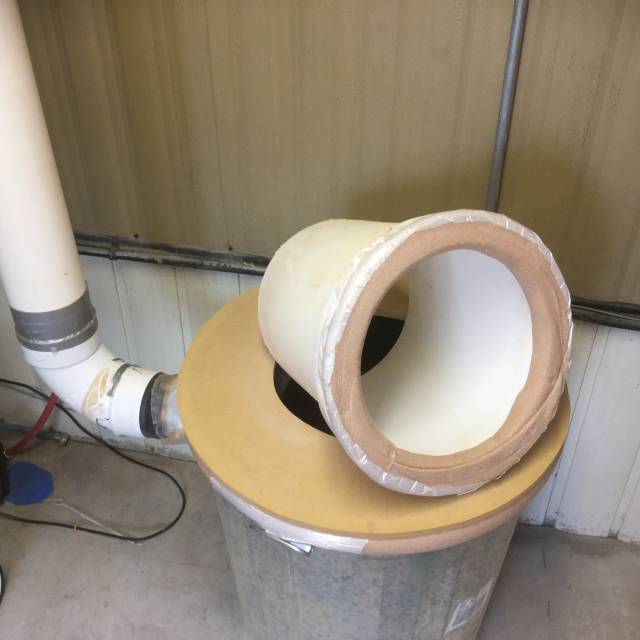 … and seated snugly on its top ring. My idea here is that a large volume column of rising air from the bucket will travel at slower speed than a smaller diameter one and carry less dust with it. ….. seems to work. 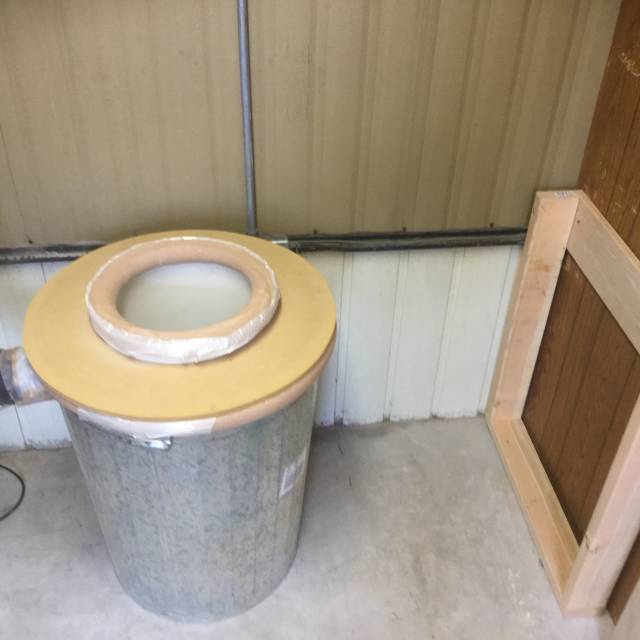 Next is the plywood base that everything else mounts on. A quick tap on the friction fit PVC pipe and you can lift the trash can end an inch or two and remove the can very easily. 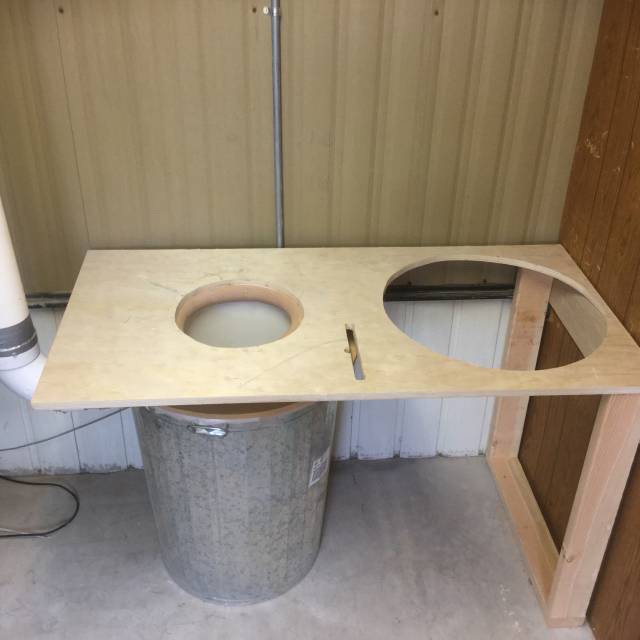 Here the motor/fan unit has been placed on top. It is sealed with some self stick weatherstrip. It’s considerable weight makes all the bits below seal very well. A heavy duty trash bag has been fitted in the other hole. 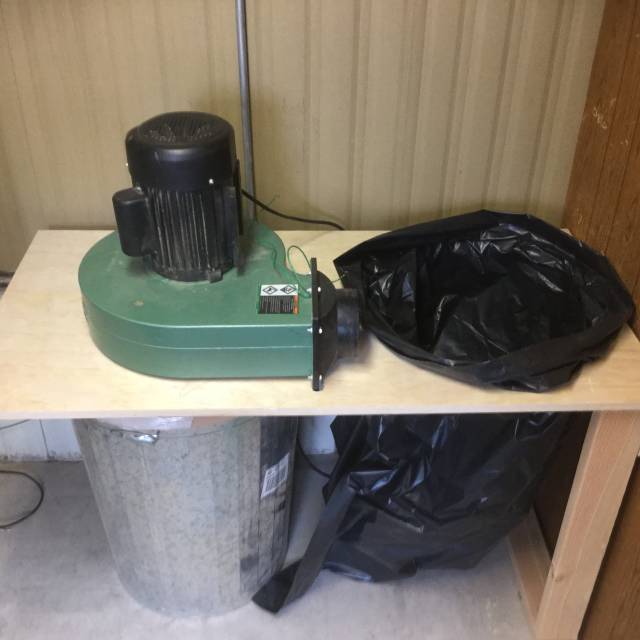 Now the diverter ring is in place and the securing strap attached under the plywood to hold the bag. 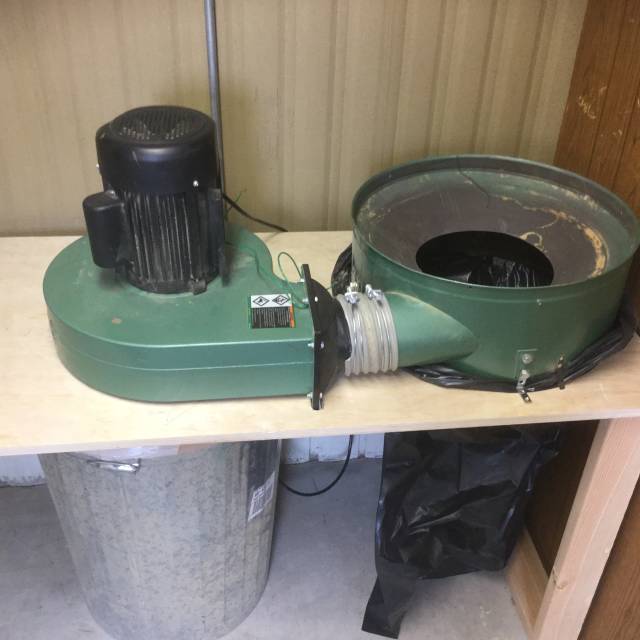 Finally the filter, a Donaldson p181099 is added and secured with light chain and turnbuckles. Again a little weatherstripping seals the joint. 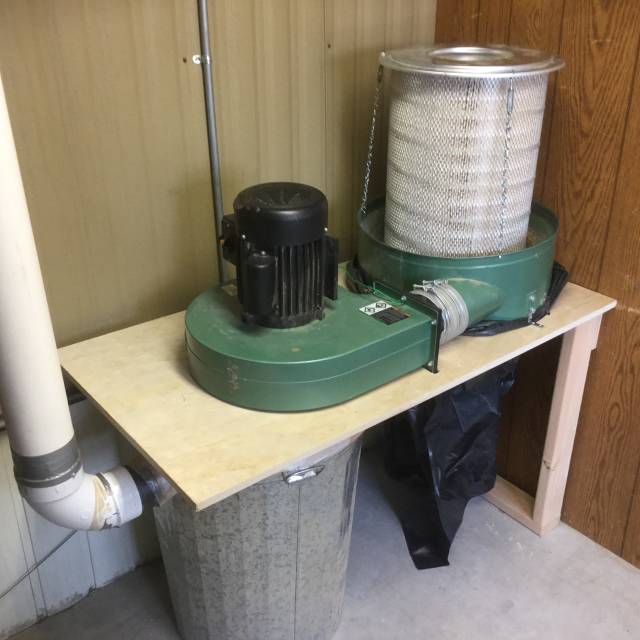 Outside the room my minimal piping serves the ShopSmith with a flex hose that reaches all the various places that the SS tools emit dust and shavings. 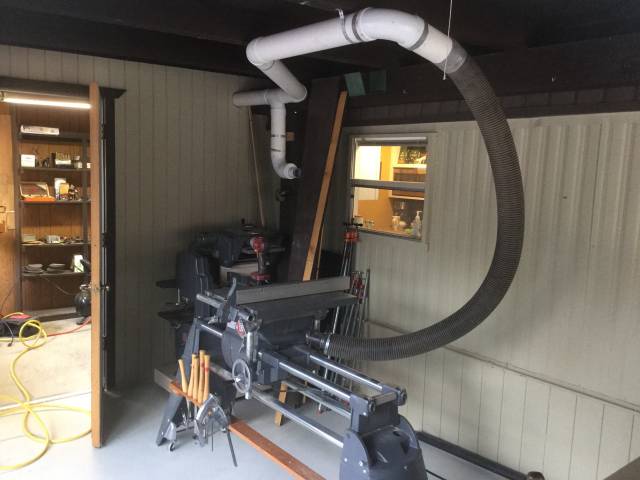 The hose swings up out of the way when not in use. 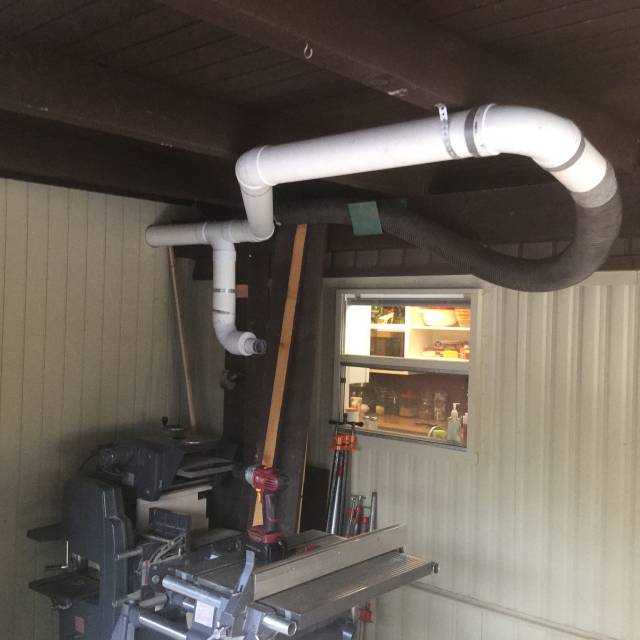 Here she is running with the bag all puffed up. 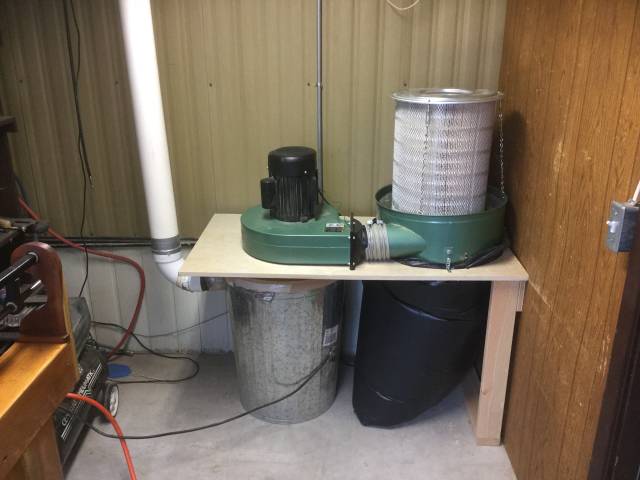 That’s it for the setup. As for the performance I can say the following:

1) For my purposes this system works wonderfully. I get only a very small amount of fine dust in the bag (which could be much smaller) and I get NO fine dust floating around when I’m using my tools, even MDF dust on the SS tablesaw.

3) The Donaldson filter can be purchased locally in almost any city and costs under $50 compared to over $175 for the Wynn.

The old and the new 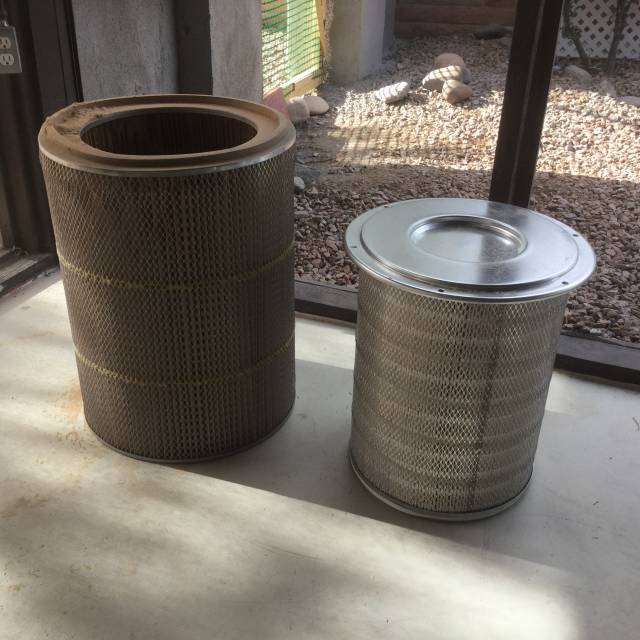 That’s a wrap I know the subject of HFDC mods has been done to death but maybe some of you can take something from this one. The only thing I may still do is to put a vortex cone in my separator ring to reduce the fine dust making it to the filter but so little does that it isn’t a priority.

I never did bother setting up my HFDC with any other type of canister collection, I left it in it’s original arrangement, but it is also outside of my shop in it’s own small closet so all the dust and what ever it sucks up gets directed outside of my shop.

-- Randy - If I'm not on the computer than I'm out making sawdust.

They are the same Brian. Neither one has the paddles. You clean them with compressed air from the outside and occasionally by taking them off, putting them in a garbage bag, and bumping them on the floor a few times. Eventually however they all need to be replaced and the price of this one will be a lot easier to swallow.

Nice find on the filter. Will you be able to clean it as easily as the Wynn? I’m guessing there is no cage on the inside.

Very clean setup Paul.
Much cheaper than a store bought cyclone.
I like how you sealed critical area with pipe insulation.
I am going to use the idea on some parts of my collector. I notice some very fine dust on the outside.

I hacked my JDS dust collector few years ago and added an Oneida super dust deputy, the steel version, and added a filter.

The only time I get dust in the container bellow the filter is when I let the chip bin fill up. The cone does a great job.

Looking back I could have save myself some serious money and made my own cone.
Between the 0.5 micron filter ($285 at the time) and the dust deputy (about $300), I wasted money I could have bout some lumber with…
Oh well!