This interview, with Myles, is from January 2016

First, let’s talk about the box with “your first attempt at inlay” 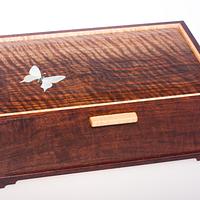 What was your biggest worry about the process
This box had more meaning than just a keepsake box for a friend, I had made a commitment to a young lady I had just met. Long story but, I reconnected with my first girlfriend through Facebook. We hadn’t seen each other in 46 years so I happened to be near her city and we agreed to meet. Long story short this was supposed to be an art supply box for her “functioning quadriplegic” 25 year old daughter in exchange for one of her paintings. She had regained some use of her arms and hands and had started painting. It was my intent to encourage her to keep painting. Anyway I got carried away and it evolved into this, not very useful for art supplies but she wasn’t disappointed. My biggest concern was when routing out the pattern on the lid that I might route outside the lines and have to come up with a creative “design change”.

What is one thing that you learned from the “first attempt”?
Just do it, this isn’t that complicated so just follow the steps and don’t be afraid.

What would you do differently next time?
Next time I’ll have more confidence in the inlay process but after seeing the box completed I’d take more time on other details like the handle. I got in a bit of a rush because the whole project had taken so long and in the end it’s the little details that really make a project. I needed something easy to use because of her limited mobility but I wish I had spent more time on the small details other than the inlay.

And what will your second attempt be?
My second attempt at inlay isn’t clear just yet but I have a ton of ideas in mind that could include some inlay. I have to finish my rocker then… Work on the list. I took a couple of classes at the American School of French Marquetry last year so, a chevalet is a priority, I met with Paul Miller (shipwright on this site) last weekend to gather info on the building of one. Very helpful by the way, like so many woodworkers willing to share. I have several designs in mind for more boxes that include inlay and marquetry.

And, now, to your story
1. What is your “inspiration story” — where did your interest in woodworking all begin?
I don’t have any one thing to point to as far as woodworking inspiration, I’ve always just liked doing things with my hands. I had machine shop classes but never a woodworking class, at least not until as an adult I signed up at a local high school just so I could access the machines.

2. Who is your woodworking mentor and why?
I’ve never had a mentor?

3. Power or hand tools? … and why
I use whatever tool that will get the job done most efficiently. Like everyone else I work and have family obligations so my time for woodworking is limited.

4. What is your dream project and when do you think you will tackle the challenge?
For years my dream project has been a Maloof rocker and I’m getting pretty close on that being checked off.

5. What is the greatest gift that this craft gives you?
Maybe when I retire I’ll consider selling some items but I make things for friends and family, gifts not necessarily for any particular occasion but just to let them know that you’re thinking of them. I’m really trying to improve and actually create heirlooms that will get passed down for generations. The warmth of wood is unlike any other material, it invites you to touch it.

Jim although I took William Ng’s class the steps are basically the same as a Fine Woodworking article from a few years back. Taking the class I learned a few steps, or at least had them explained to me but I did buy William’s little router base for the Foredom and used it, although seeing shipwright’s version that he designed and made and a Dremel would do just fine for the routing of the cutout. A small vise of some sort to hold the inlay materials for cutting and shaping, some chalk and an xacto knife. One thing I’ll consider next time if I can is to try to have a larger area where the inlay pieces come together, where the wings meet the body, it’s super glued together before inserting into the cavity so if I can make it a bit sturdier I will. Also I put a couple of small cubic zirconia stones for the antenna that I just couldn’t get to set right, I’ll mock it up better next time.

Paul I really enjoyed the visit. 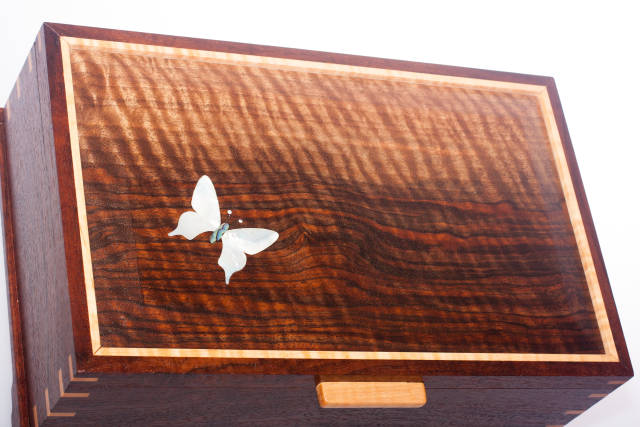 Nice interview Myles.that is a beautiful box and the inlay turned out very well . Reconnecting with a past girlfriend after all those years is pretty amazing . What tools did you use doing the inlay.