My last entry here was almost a month ago and I was about to leave for Arizona for the winter. Well, I’ve been here (Az.) for almost a month now and I’m just getting around to the jewellery box. When I left off I had just dovetailed the drawers and dry assembled the whole box to assure myself that going on was in fact, a good plan. There’s a little more to the drawers but I’ll deal with that another time.

This entry is dedicated to Pierre Gole, one of the truly gifted “masters” of the Louis XIV era. I had originally wanted to do the top end ends with some Jean Henri Reisner tracings I had done and use a lozenge background as he often did. It might have looked something like this. The top here is a colored printout of my tracing and the drawer fronts are printouts of photos of my actual marquetry. 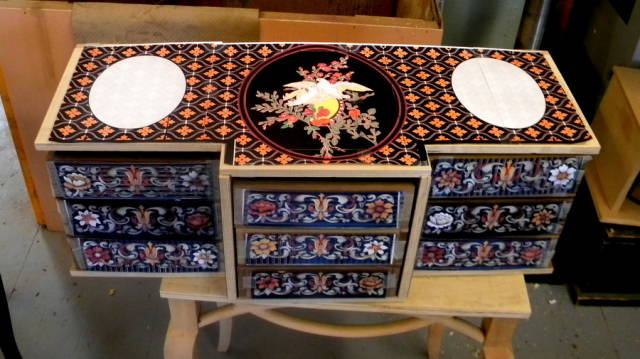 When I asked Patrice (mentor) what he thought of the idea, he kindly pointed out that I was mixing Louis XIV with Louis XVI and that really wasn’t right. After some study I wholeheartedly agree. He sent me off paging through my copies of Pierre Ramond’s books and searching the internet for more epoch appropriate motifs. I haven’t settled on a top motif as yet although I have some ideas but I think I have the ends figured out, pending approval from my mentors of course.

Here’s what I found and what I’ve come up with for the side (end) motifs.

This is a photo from Google images of one of Pierre Gole’s iconic pieces. Beside it is my Inkscape tracing (by hand, not autotrace). I don’t know why they look so fuzzy here. 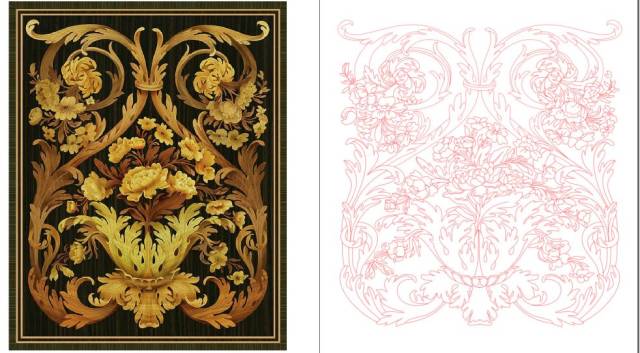 When I printed it out it was clear that it just wouldn’t work in a 9" square area so I started “messing” with it. Whether it is tribute or sacrilege, I’m not really sure but I do know I’m not alone in doing it.
I enlarged the central part and eliminated the swirls in the top corners first but that left the top looking vacant and the motif was the wrong shape for the space so I “borrowed” some elements, re-sized them, copied them, flipped them, and rotated them and came up with what I think are complimentary corner motifs. 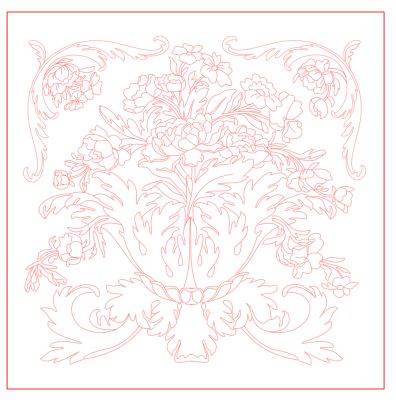 To be sure that they were cut-able, I decided to do a practice run of the new corners before committing to the good veneer. As I was also looking at some other Gole motifs for possible inclusion on the top I made a little composition including the corners and a bird / acanthus / flower motif that I found in one of the “Masterpieces of Marquetry” volumes. This is a photo of part of a page. 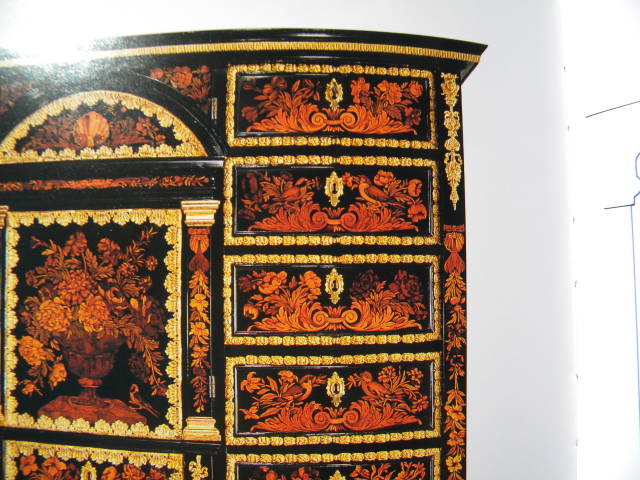 From that fuzzy photo I did a tracing of the motif and added a couple of extra leaves to suit my space.
the composition looked like this. 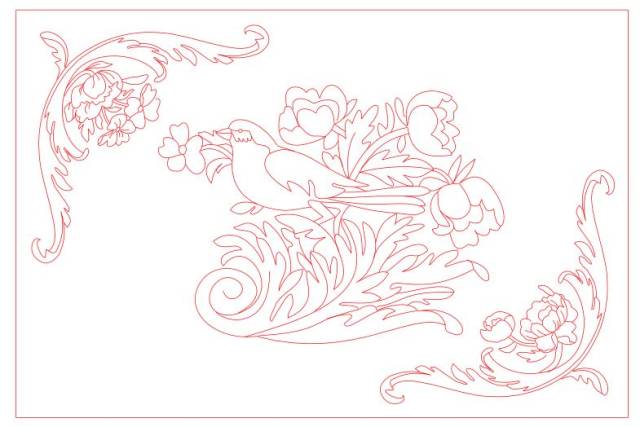 I cut it in a 6" X 9" format to simulate the size the corners would be on the jewellery box using dyed black, padauk, curly maple, and poplar in painting in wood style. 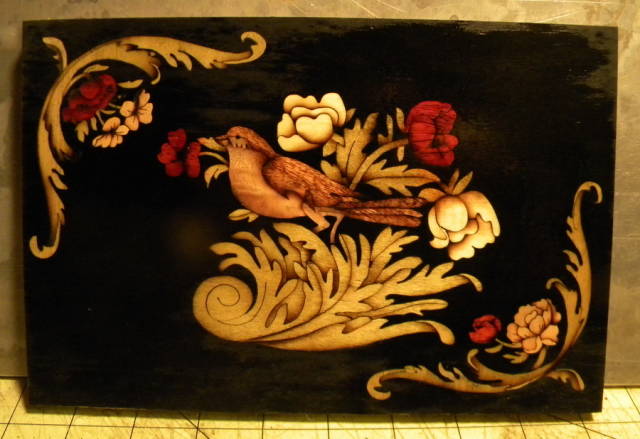 My wife really quite likes it so it will become a little box to sit on our breakfast table to house our various “nesting material” that accumulates there. This, however is likely as far as it will go for now as it was primarily an experiment.

That’s enough for now. I’ll be back when there’s more to talk about. It’s getting exciting.

I haven’t the words to tell you how impressed i am with your work here Paul. Also my computer is in for repair, so I’m using my iphone to view it. I can’t wait to see it on the big screen!

I checked it out earlier. “La marqueterie” is indeed out of print. There are some used ones for grab.
French is easier than marqueterie for me.

I am flattered Abbas but in reality I am closer to Rory McIlroy in my golf game than I am to Pierre Gole in my marquetry (and I shoot around 90). :-)

The books I mentioned are unfortunately out of print. They are available but expensive. However if you are serious about marquetry, they are worth it.
I have
“Marquetry” …. Pierre Ramond
“Masterpieces of Marquetry” (set of three books) …. Pierre Ramond
And am considering
“Pierre Gole, ébéniste du roi Louis XIV” by THL Scheurleer
Malheureusement, my French, while somewhat passable in conversation isn’t likely to give me the full benefit of the text. ……. but then it’s the pictures I would be buying it for.

sacrebleu! T his is an entirely different level Paul.

I am not surppised your wife likes it; who wouldn’t? Simply beautiful but more importantly your are on the same footing as Pierre Gole.

I am going to read on all the references you mentioned.

PS: I would have no quarrel mixing all the Louis as they have the same lineage LOL.